When traffic is down, the crews extend time with lane closures, resulting in project progress. 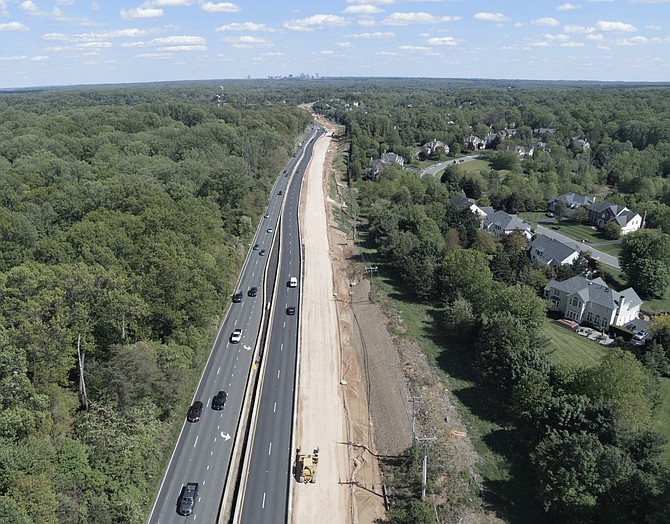 Traffic on Route 7 through Great Falls, Wolf Trap and Reston areas, where VDOT is widening the road from four to six lanes, at almost 4 p.m. last week. Photo by the Virginia Department of Transportation

The quarantine that seems to have no end is having some positive impacts. With most businesses closed and most people staying home most of the time, rush hours have been minimal, gas use is down, local streets are becoming the roads less traveled. For road crews, this is time to pick up the pace.

With traffic volumes down 40-60 percent in the region over a regular work day, VDOT says, crews have in some areas been able to extend their lane closure hours. Motorists in Northern Virginia will appreciate quicker too, after suffering through years of extended lane closures due to the express lanes projects, bridge rehabilitations and road widening that’s occurred on I-95, Route 7 and I-395.

There are several examples where this is happening, VDOT said. In Tysons Corner, for one, crews were originally only approved to close lanes to work at night on a $2.5 million project to rehabilitate two bridges where Route 123 (Chain Bridge Road) crosses over Route 7. VDOT has allowed daytime closures in this heavily traveled area over the last couple of months as traffic volume has allowed. Typically, Route 123 averages up to 30,000 vehicles a day and Route 7 up to 86,000 a day at this location. The project is supposed to be complete this coming winter.

Along Route 7, where VDOT has been widening almost seven miles of congested roadway from four to six lanes, adding trails and sidewalks, and reconfiguring intersections, work hours have also been temporarily extended due to decreased traffic. About 52,000 vehicles a day had been the typical average through this stretch of Route 7. Earlier this year, lane closures were generally set between 9:30 a.m. to 3 p.m. to avoid traffic. Next week, crews will be closing lanes westbound 7 a.m. to 4 p.m. and eastbound 9 a.m. to 7 p.m. to install pipes, excavate, fill and pave along the corridor. The $313 million project is expected to be complete in 2024.

It’s hard to say how long extended work will be viable, but VDOT is monitoring traffic conditions closely, it says, and will adjust lane closure schedules as traffic volumes change.

While most projects are multi-year efforts, it may be too soon to tell if traffic has made a major impact. For projects that were scheduled to be finished this fiscal year, 90% have been completed on-time or ahead of schedule, according to VDOT.