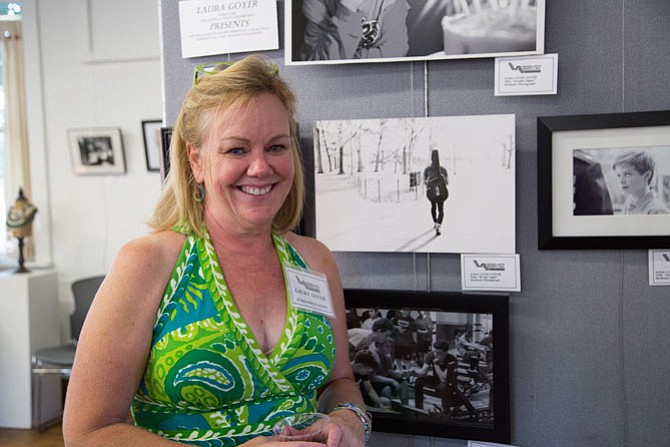 Laura Goyer, a Vienna Resident, and a photographer herself, was a judge for the show at the Vienna Arts Society on Saturday, Aug. 19. Here she stands next to some of her own work which was separate from the show.

By By Colin Stoecker

Vienna — The Winner of Vienna Art’s Society’s Annual Photography Exhibit “The Human Condition,” is not only 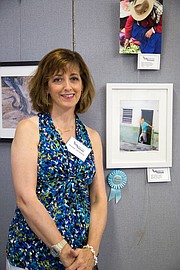 Susan Scanlon, a Vienna resident, lived abroad in La Paz Bolivia for three years with her husband who is in the Foreign Service. Her photos from Havana, Cuba, won her honorable mention.

a photographer: Deborah Kennedy, who runs Artspeaks and took home first place for her photo “Gone,” accompanies her photographs with poems.

“Gone” is a picture of Kennedy’s daughter when she was 15 years old. Kennedy recited the poem to the room, reflecting her daughter’s attitude some 10 years prior when all she wanted to do was hurry up and get out of this point in her life. “It’s obvious the photographer is really focused on her and she is oblivious about everything else going on around her. She’s like the world doesn’t exist for me,” said Kennedy.

Director of the Vienna Arts Society, Lu Cousins, said that her idea for the show was indicative of the unrest going on in the nation at large. “We have a show every August and a photography competition, but this year there so much going on and so many emotions in communities. We want the photographers to be able to pick out whatever they want, a building or asking questions like who lives in it?” she said.

According to Cousins, this was not a typical photography show, as all of the competitors were members of the Vienna Arts Society. Still, there was a judge present, Laura Goyer, a Vienna resident, and a photographer herself.

Goyer, who was a pediatric physician for 25 years, also had a display of photographs at the show representing “The Human Condition,” although hers were not judged.

“It’s easy for me to pick the best photographs that I love, but it’s hard to convince somebody else that these are better because it requires a reason. Feedback is my favorite part of the show, and I enjoy working with artists who are open to parts of their work that could be altered and telling them about what I liked,” said Goyer.

Diane Blackwell, of Houston, Texas, won second place for “Into the Light.”

The photographs submitted by member-photographers did not have to be from a specific time or place, and many submissions came from trips abroad as well as from many years prior.