Sisterhood of the Salaam Shalom Brings Communities Together
Votes

Sisterhood of the Salaam Shalom Brings Communities Together

Local unity vigil draws a crowd from all over the Metro area. 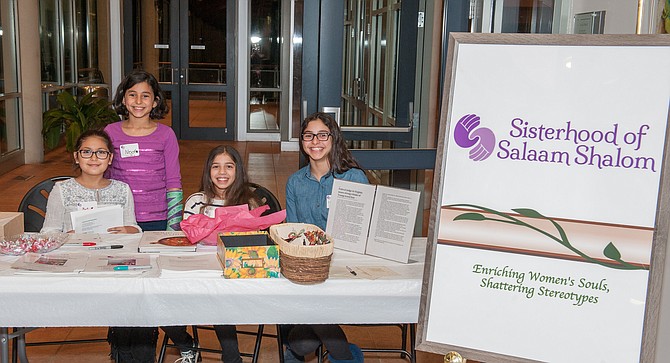 Young greeters to the Vigil. Photo by Frank Kohn

Joan Brady is a professional photographer; co-owner of Spirited Media, Inc.; award-winning columnist; mentor and advocate for current and former foster children; a volunteer with paws4people and others; and a resident of Great Falls. Reach her at joan@joanbradypho... 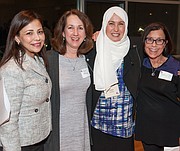 Some of the vigil participants.

Bob Murro, member of Board of Trustees and chair of Government Relations & Interfaith for Adams Center.

Reston and Northern Virginia Chapters of the Sisterhood of the Salaam Shalom.

Vigil closes with the singing of “This Land is Your Land.”

America the Beautiful greeted all who entered the Sisterhood of the Salaam Shalom Unity Vigil on Feb. 16, 2017, at Temple Rodef Shalom in McLean. The event was co-hosted by the Northern Virginia and Reston Chapters of the Sisterhood.

More than 130 women, men and children of many faiths gathered from Fairfax, Loudoun and Prince William counties, even drawing attendees from Maryland and D.C. for the interfaith service which included the musical stylings of Rachel Schreiman and Rob Weissman.

“We are here tonight to join our fellow Sisterhood chapters across the country who are right now holding similar Unity Vigils in the face of deepening concerns over hate speech and discriminatory policies in our country. We are here to share our hopes for a world where we live together in harmony and with respect for one another, no matter our religion, our nationality, our skin color or our sexual orientation... We are here to support and care for each other and for the stranger and for the refugee. We are here to show our children how we work together for a better world — one which they will inherit…” Susan Kohn, co-lead for the Northern Virginia Sisterhood of the Salaam Shalom chapter kicked off the event.

“We gather here together to continue our learning process, because ignorance of each other’s traditions leads to divisiveness, while knowledge of the other encourages understanding.”

Alliance for an Indivisible America 2020: (AIA) wants all Americans to perceive, and connect with, Muslims as they are: People who see America as a beacon of freedom, of hope for the future, of healthy and stable communities, and of prosperity for families; and people who commit to America and its values, as have their fellow immigrants throughout American history. We wish all other Americans to recognize their Muslim neighbors as industrious, inclusive, and often highly educated contributors to the nation from its very earliest days, and to welcome American Muslim friends, neighbors and colleagues who share fundamental values and our uniquely American inclusiveness, and concern about the threat of violent extremism worldwide.”