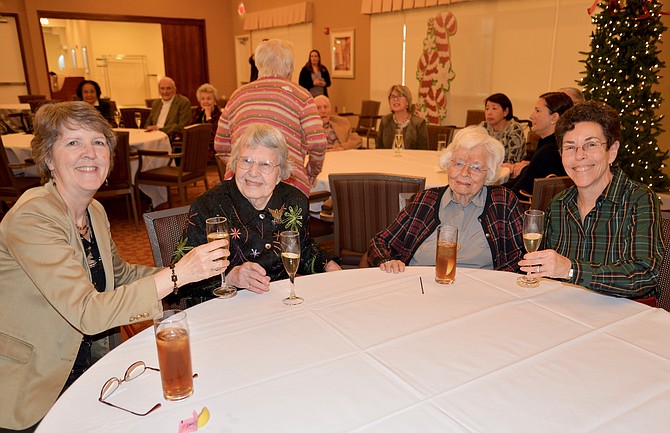 Having a great time at the birthday bash! From left: Nicki Birch with her mom, Jane Peak; Cecile Cover and her daughter-in-law Bonnie Lepoff. Photo by Andrea Worker. 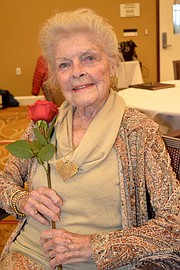 Gervais Brekke celebrates being 98-years-young at the Birthday Bash in honor of Vinson Hall Retirement Community residents aged 95 and older. 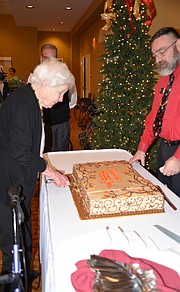 The oldest resident at Vinson Hall at 101, Ms. Hollis Blood does the honors and cuts the first piece of birthday cake for the birthday celebrants. 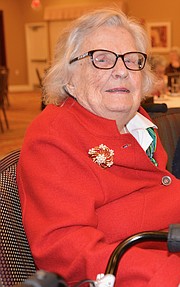 Audrey Cole celebrates being “more than 95!” at the Vinson Hall joint birthday bash for the 47 residents who have all achieved that milestone birthday – or surpassed it.

One special memory that stands out for Dorothy Smith in more than 95 years of living? When her high school sweetheart got a few days leave and she and the Navy pilot were married in 1940.

That’s the combined years, days, or hours of life – depending on how you calculate it – that forty-seven residents of the Vinson Hall Retirement Community have achieved, and what staff, family and friends had gathered to celebrate on Monday, Nov. 26, at the complex of living facilities in McLean. It’s the first time that VInson Hall has hosted a joint birthday bash for those who have reached the 95-year milestone or beyond, or who are about to do so in just the near future.

“It’s the inaugural event,” said VInson Hall CEO Libby Bush, crediting their Chaplain, Scott Harrison with the idea, “but I think it will become a new tradition.”

Harrison handled the emcee duties for the party. He started with a “stroll down memory lane for some” having researched some “interesting facts and statistics” that many of the celebrants had lived through over the years. Not only had they experienced a myriad of personal moments like marriages, births, deaths, accomplishments, travel, friendships and more, but they were also witnesses to so many of the events that shape our world even today.

“The Roaring ’20s, the Great Depression, World War II, technological advances and amazing developments, the list goes on,” he noted. “And some changes in the cost of things over those years, too!”

When Chaplain Scott mentioned the transition from silent films to “talkies” and from black-and-white to color, everyone seemed to have a favorite movie star from the “good old days” that they wanted to acknowledge.

The Chaplain was also the one to read out the names of the honorees, with their birth dates, saying a few words about each as staff wandered through the tables to present each celebrating resident with a rose, donated by Karin’s Florists of Vienna.

And of course, there was champagne and cake.

Woodrow Wilson was serving as 28th president when the oldest of the Vinson honorees – Hollis Blood – was born. A native of Indiana, the 101-years-old Ms. Blood was asked to cut the first slice of the birthday cake – with its “Celebrating 4588 Years” frosting message – to share with her birthday pals.

Asked what the secret to longevity is that we might share it with Connection readers, Ms. Blood laughed, “Bourbon!” then quickly added “now that’s a joke! We don’t want to give people bad habits!”

One of her table-mates at the event, Audrey Cole, who still paints and exhibits her work, credited “great doctors” for helping her to reach the near-century mark. “And keeping busy.”

Mrs. Jane Peak, who proudly boasts the longest tenure at Vinson Hall with 29 years in residence, answered that longevity question quite simply. “You just get up every day!”

Mrs. Peak, 98, says that Vinson Hall has everything she needs to keep doing just that. Aside from enjoying visits with nearby family, she can be found in the pool at least twice a week, “going for the gold” at water volleyball. “We just have such a good time,” she said. “I love it.”

Dorothy Smith, who looks forward to turning 99 next year, thinks “eating cake” is part of the longevity equation. Asked what was one special memory from her many years, she quickly replied: when her Navy pilot high school sweetheart got a few days leave in San Francisco in 1940. “It gave us the chance to get married!”

Cecile Cover, another birthday honoree, was a Navy Wave. In her youth, she was seriously into tumbling, which she practiced back in St. Paul, Minn. Today, she still attends the exercise classes that keep her ever fit, “but maybe no more tumbling!”

Gervais Brekke, also 98, is the daughter of a Navy rear admiral. With her Norwegian husband, Mrs. Brekke started a sailing school for children and teens on the Potomac.

AFTER THE CAKE was passed around, the champagne flowing and a rousing chorus of “Happy Birthday” sung by all, residents, family members and staff just enjoyed a good time with lots of chatting, and the sharing of stories that only folks of 95 or older can tell.

Looking out on the room filled with so much life, Chaplain Scott was moved to say that he saw the secret to their long-lived success. “You are all engaged, and engaging!”

Vinson Hall Retirement Community offers five levels of care to its residents, from independent and assisted living to health care, memory support and short-term rehabilitation. Supported by the Navy Marine Coast Guard Residence Foundation, VInson Hall serves retired military officers and their immediate families, as well as retired employees of various government agencies with a GS ranking of 14 or higher.

“Tell everyone to come on over here,” said Mrs. Peak. “We love to meet new people and welcome new neighbors.”