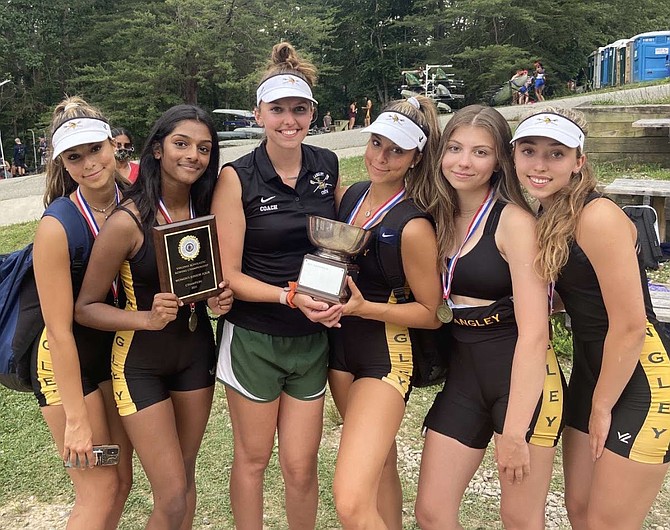 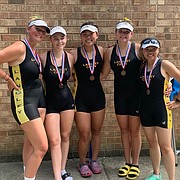 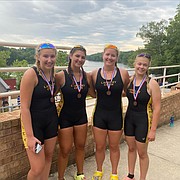 The Langley High School Crew knocked it out of the water when the athletes ended their rowing season on June 19 at the 2021 Virginia Scholastic Rowing Championships regatta hosted by the Virginia Scholastic Rowing Association. A reported nine out of ten Langley Boats advanced to finals at States with four boats placing in the top three and one winning the State Championship for Langley Crew for the ninth consecutive year, excluding the canceled 2020 COVID season. The race competition lasted more than 10 hours before the last boat in the final heat docked.

According to VASRA Results, Langley boats took one Gold and three Bronze at the regatta held on the Occoquan Reservoir, Sandy Run Regional Park.  Due to COVID restrictions, only athletes and coaches were permitted in the park. Drone recording of the regatta from Sandy Run Park allowed spectator viewing from locations outside the park.

COACH David Rummler said that his conservative guesstimate of total rowing miles over the 7-month training period, December 2020 - June 2021, equated to rowing 626 miles |1,000,000 meters |100k strokes. Due to the pandemic and COVID restrictions, the Crew practiced using ergs, indoor rowers placed in the school parking lot to maintain social distancing during land training. They could measure the amount of work performed by the rower. Later they held water practice on the Occoquan Reservoir.

Boats in the regatta were either four or eight-person shells, not including the coxswain, the on-the-water crewmember, coach, and strategist who steered the boat.  The rowers sat facing backward on sliding seats, each rower handling a single oar on alternate starboard and port sides of the boats.The Men's Junior 8 boat [680M-JR-8] with Saxon athletes Coxswain: Soames Rummler of Great Falls and Rowers: William Trosch of McLean, Hyunseung Moon of McLean, Tyler Abele of McLean, Benton Lake of McLean, Riley Luce of Great Falls, William Navas of Great Falls, Ryder Greeneltch of Vienna, and Nicolas Kristensen of McLean placed third [3 - 00:07.3 - 05:06.1 - Langley (3)], earning Bronze.

As the coxswain, Rummler sat at the back of the boat near the rudder with a microphone connected to speakers in front of every other rower. He was the only person who could see where the boat was going.

Asked about his role, Rummler said, "I am the brains of the boat, and the rowers are the muscles…[They] trust me to think and navigate them safely up and down the river." As the cox, he was a conduit between the coach and the rowers. According to Rummler, he made calls to set the tempo. "We are at 36 strokes per minute at 145 power." He made the technical and navigational calls. "Feather at three quarters slide." Most importantly, Rummler made motivational calls. "Give it your all and harness the fire."

Vargas explained that boat members must "work together to keep even handle heights, drop the oars in at the same time, and get in a rhythm for the boat to succeed." She said all five of them showed up and worked hard "every single day." Vargas explained Crew is bigger than just one person.

CREW demands the connection of the people in the boat and them working together towards something greater, the team's success. "You can't make it in rowing by yourself.  You need the support and dedication of your teammates, coaches, parents, and the board to make Langley Crew thrive," Vargas said.

Conner said that rowing is a sport for everyone, there are no tryouts, and the only thing you have to do is pass a swim test. It is a demanding sport physically and mentally, but all types of people join. "From the loudest to the quietest, Langley Crew is open and accepting of everyone," said Conner.   She added that people she never thought would be her best friends because of differences are - Crew brought them together.

"I made my best friends on this team," Conner said. A Crew 2020 21 End of Year Video - YouTube is available for viewing and shows the Crew during land and water practices, regattas, and other activities.

The Crew Team is a sanctioned club sport at Langley High School, not supported by Fairfax County Public Schools or Langley High. Generally, winter training starts in mid-November and runs through the end of February. Coaches work with the athletes to build their cardiovascular conditioning and impart basic rowing techniques.  The Langley Crew Team is supported by a strong cadre of parent-volunteers who run the Langley Crew Boosters Club.