Naturalization Ceremony by USCIS Held in the Town of Vienna
Votes

Naturalization Ceremony by USCIS Held in the Town of Vienna

Their stories are now our stories, to be woven into the fabric of the United States of America. 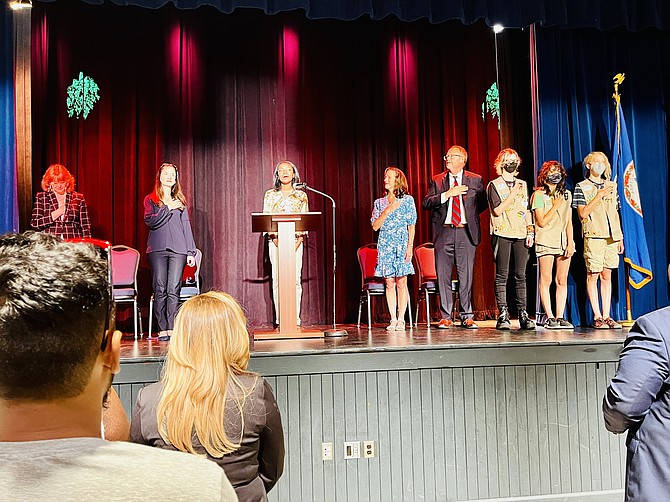 Fifteen naturalization candidates from Afghanistan to Bolivia, Albania to Ghana, Nepal to the Democratic Republic of the Congo, and nine other countries, assembled in the community center in the Town of Vienna, Va., two days before the 4th of July. Each had prepared to take the Oath of Allegiance to the United States of America and become citizens. They had studied hard and were ready to declare they would "support and defend the Constitution and laws of the United States of America against all enemies, foreign and domestic” … so help them, God.

The U.S. Citizenship and Immigration Services held its first-ever naturalization ceremony in the Town of Vienna on Saturday, July 2, as part of the town's Liberty Amendments Month, celebrating the 13th, 14th, 15th, and 19th amendments to the U.S. Constitution. When the 14th Amendment was passed in 1868, it gave citizenship to everyone born or naturalized in the United States, including formerly enslaved people. It also said, among other things, that all citizens would get "equal protection of the law."

Linda Colbert, mayor of the Town of Vienna welcomed the 15 candidates as their families, friends, and distinguished guests, among them Del. Mark Keam (D-35) and Supervisor Walter Alcorn (D-Hunter Mill).

"This is a very significant day in your lives, and it marks a change in your life going forward as a new citizen of the United States of America," Colbert said. "Naturalized citizens are an important piece of the fabric of our country. You bring many talents and unique qualities that shape the character of our nation."

Colbert urged the candidates to stay informed nationally and locally, recognize and exercise their right to vote, and, wherever they lived, express their ideas at town hall meetings. "Volunteer in an organization and run for public office. Every community needs to hear from its citizens, and it needs a broad range of people with different backgrounds and ideas," Colbert said.

Max Carroll of the U.S. Citizenship and Immigration Services (USCIS) presented the candidates and recommended that they be administered the Oath of Allegiance, admitting them to United States citizenship.

"Raise your right hand and you will be repeating after me," said Kimberley Zantonni, Washington Field Office Director, USCIS in Fairfax. “I hereby declare, on oath, that I absolutely and entirely renounce and abjure all allegiance and fidelity to any foreign prince, potentate, state, or sovereignty ... I will support and defend the Constitution and laws of the United States of America against all enemies, foreign and domestic ..."

Keynote speaker Avril Haines, Director of National Intelligence and the first woman to lead the U.S. intelligence community, congratulated America's newest citizens on reaching the final step in the naturalization process. "I suspect you'll remember this occasion for the rest of your lives. I am truly honored to be among those bearing witness and to celebrate your joining us as fellow Americans," Haines said.

Haines said the community center setting struck her as the perfect place for the ceremony because the new citizens were, at that moment, truly joining the U.S. community. She asked, "What better place to do so than in the State of Virginia, where Thomas Jefferson, the primary author of the Declaration of Independence, lived, and on the very weekend that we celebrate the 246th anniversary of its adoption?"

Haines’s grandparents were immigrants. Their stories about how they got here were extraordinary and different, just as true for the 15 new citizens seated before her. They too were equally passionate about becoming citizens of the United States.

"They recognize that we were not perfect. They were enthralled by a government that vests power in the people, and they understood that the Constitution to which you have now sworn allegiance confers both rights and duties to those who are bound by it. And much like you, my grandparents didn't look alike ... didn't worship the same, and their journeys were remarkable," Haines said. Each new citizen had an incredible story to tell, and now their story is part of our country’s story. They would weave their accomplishments and experiences into the larger story of our nation.  Haines told the new citizens that the U.S. needs them as much as they need the U.S.

"I don't want to sugarcoat it. Being an American, that is, being a citizen in a democratic government, is hard. You have to get involved in order to ensure that we live up to the ideals that we have. It is up to us to make sure that the United States is the best country that it can be. ... You're the future of the United States of America; you are the writers of our future history... We need the diversity of your ideas, your talents, and your spirit. American citizens represent a host of ethnic, social, racial, sexual orientations, religions, agents, and geographies, and our nation is stronger for it... "Congratulations to each of you, my fellow citizens," Haines said.

After the ceremony, Mercury Payton, Vienna town manager, said that the naturalization ceremony was a reminder of how great it is that we have a nation where people from around the world want to call this country their home. It is "because of the liberties guaranteed by our U.S. constitution, which is full of hope, promise, and opportunity," Peyton said.