Langley High School Orchestra Presents Out of This World
Votes

Langley High School Orchestra Presents Out of This World 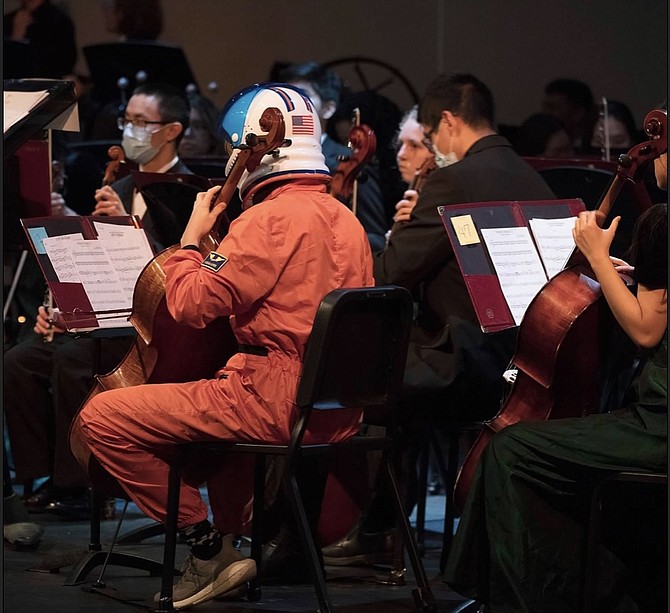 Cello player Zach Baker dressed up as an astronaut to make the senior performance truly out of this world! Photo by Jen Dzwonczyk

By By Erika Li, Langley Senior

Under a swirling sky of stars projected on the ceiling and before a packed house of exhilarated audience members, Langley High School’s orchestra closed out the school year with a space themed concert for the ages.

The evening began with a grand opening, with the Philharmonic orchestra performing Gustav Holst’s beloved “Jupiter,” from the Planets suite. Aptly epigraphed as “the bringer of jollity,” the piece exuded vitality and grandeur, an effect amplified with full brass, woodwinds, and percussion accompaniment. On a similarly momentous note, the orchestra then presented the world premiere of “The Artemis Generation,” guest conducted by the composer himself, Doug Wallace. The piece was commissioned by the American Youth Philharmonic Orchestra and features prominent percussion sections, creating a futuristic and haunting sound that conveyed the piece’s message of hope for a new generation of space explorers.

Langley’s senior orchestra members then performed a slate of nostalgic space-age pieces. They first presented the main theme of the classic movie E.T. The Extra-Terrestrial, by John Williams, an airy and whimsical piece with a message on the importance of friendship and childhood. From the science fiction film Interstellar, the senior musicians performed Hans Zimmer’s “No Time For Caution,” an eerie and powerful piece amplified with an organ backing track. Langley’s auditorium was then transported to a galaxy far far away, with the senior musicians playing “Rey’s Theme” by John Williams, a piece from Star Wars: The Force Awakens. Performers wrapped their bows in colorful LED lights, reminiscent of lightsabers and epic space battles as they played through the music.

The junior musicians of the orchestra then took the stage with iconic extraterrestrial-themed pieces from the silver screen. With Michael Giacchino’s Star Trek, then James Horner’s “I See You” from the blockbuster film Avatar, clips from movies played on the screen alongside the musicians. Freshman cellist Luke Yang noted that the “movie scenes in the background was a cool idea that added a positive element to the concert.” The junior orchestra members closed off their section of the performance with a universally recognizable medley of themes from Star Wars: The Last Jedi, by John Williams.

The Concert orchestra, composed of freshman and sophomore players, carried a modern and futuristic tone through their repertoire of pieces. Beginning with the theme from world-renowned British television series, Dr. Who, by Murray Gold, the orchestra told the story of an eccentric alien traveling through time in a telephone box through exhilarating and mysterious musical passages. The next pieces were amped up and energizing, with the superhero-themed “Emerald Falcon” by Richard Meyer, and the theme from the video game Halo, by Marty O’Donnell, accompanied by junior Wesley Chang on electric guitar.

In a bittersweet close to the evening, senior musicians once again took the stage to perform “City of Stars” by Justin Hurwitz, from the critically acclaimed film La La Land. Langley’s orchestra has a long-standing tradition of a “senior song,” a piece selected by graduating orchestra members played over a slideshow of all their post-high school destinations. “City of Stars” was a particularly meaningful selection- the same senior song was selected by the graduating class of 2020, who never got to perform it due to the pandemic.

Reflecting on their tenure in Langley’s orchestra, senior musicians are nostalgic. “Orchestra has been such a core part of my high school experience,” says senior violinist Anh-Thu Pham. “I’ve made so many great memories and this concert was an amazing way to conclude my four years in the program.”