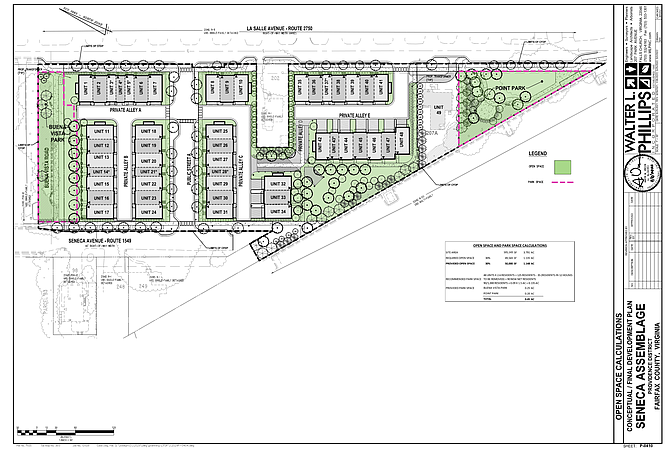 At the June 1 McLean Citizens Association (MCA) Board of Directors Meeting, moderated by Rob Spitzer, president of MCA, members unanimously approved its revised Resolution, dated the same day, supporting the Application and rezoning of the Seneca Assemblage, pursuant to RZ 2021-PR-00019/FDP 2021-PR-00019. The Final Development Plan shows the construction of 48 new townhomes by Toll Mid-Atlantic LP Company, Inc. (“Applicant.”). Eight of the 48 townhomes will be affordable dwelling units, slightly narrower than other units and scattered throughout the assemblage.

The McLean site in Fairfax County is in a portion of the Providence District on a 3.8 area parcel northwest of Magarity Road between Seneca Avenue and LaSalle Avenue in the East District of the Tysons Urban Center. The applicant refers to the property referenced in the Resolution as the “Seneca Assemblage.”

Robert M. Perito, MCA Planning & Zoning Committee chair, presented an overview of the project during the June 1 meeting. According to Perito, the applicant requested to rezone 3.8 acres from R-1, individual homes, to PHD-12 (Planned Development Housing, District 12, dwelling units/acre). It was consistent with the Comprehensive Plan for the East District of the Tysons Urban Center and McLean Ridge neighborhood immediately adjacent to the Seneca Assemblage.

The rezoning would permit the removal of 13 existing single-family detached homes and replace them with 48 new townhomes. The eight proposed Workforce Dwelling Units would comply with Fairfax County requirements. “They are 16-feet wide rather than 22-feet wide,” Perito said.

The development would also include, Perito said, one existing single-family dwelling, the Retained Dwelling. According to Perito, the resident owners of the Retained Dwelling home were cooperating with the Applicant and participating in requesting rezoning. However, their home had children with special needs, and the owners had made adaptations.

The new development would vacate the undeveloped right-of-way for the never-built Buena Vista Road. According to Perito, this area, known as Buena Vista Park, 0.25 acres, would be for use by area residents. Two other parks at the edge of Seneca Assemblage, Courtyard Park, a 0.12-acre private park (a bit more than 5000 square feet), and Point Park, a 0.20-acre, would include a “tot lot” play area. Constructing a new public connector road, “New Road,” within the Seneca Assemblage in lieu of the never-built Buena Vista Road would improve accessibility between Seneca Avenue and LaSalle Avenue.

According to  the  Resolution, Applicant contended that “rezoning should be approved because it: (1) meets the density requirements of the Fairfax County Comprehensive Plan for the East District of the Tysons Urban Center; (2) will double the park space required under said Comprehensive Plan;(3) complies with the Fairfax County Board of Supervisors’ policies concerning Workforce
Dwelling Units; and (4) will improve transportation accessibility with construction of a new public street in lieu of the planned Buena Vista Road.”

Perito said that Final Development Plan and rezoning provisions of the application appeared to comply with the Comprehensive Plan requirements of Fairfax County.

During the discussion and before approval of the resolution, the Board wanted to clarify that while “surrounding neighborhoods and the resident owner of the Retained Dwelling generally support the Applications,” one group, “nonetheless” had concerns, the residents of McLean Ridge HOA. Hence, the word “nonetheless” was added. McLean Ridge HOA had requested key changes to include, among other things, the following.

The discussion introduced by Jennifer L. Jones, first vice-president, led to an approved revision to the proposed Resolution while it was a working document.

The directors approved an added phrase to the proposed Resolution’s final paragraph, “Now, therefore, be it resolved that the McLean Citizens Association supports the Application and rezoning of the Seneca Assemblage pursuant to RZ 2021-PR-00019/FDP 2021-PR-00019.”

The tacked-on phrase states, “but recommends that the County consider the concerns of the McLean Ridge HOA regarding the need for installation of speed bumps on the New Road and Seneca Avenue to ensure safety for residents who enjoy the parks in the Seneca Assemblage, and the proposed commercial bicycle rental facility.”