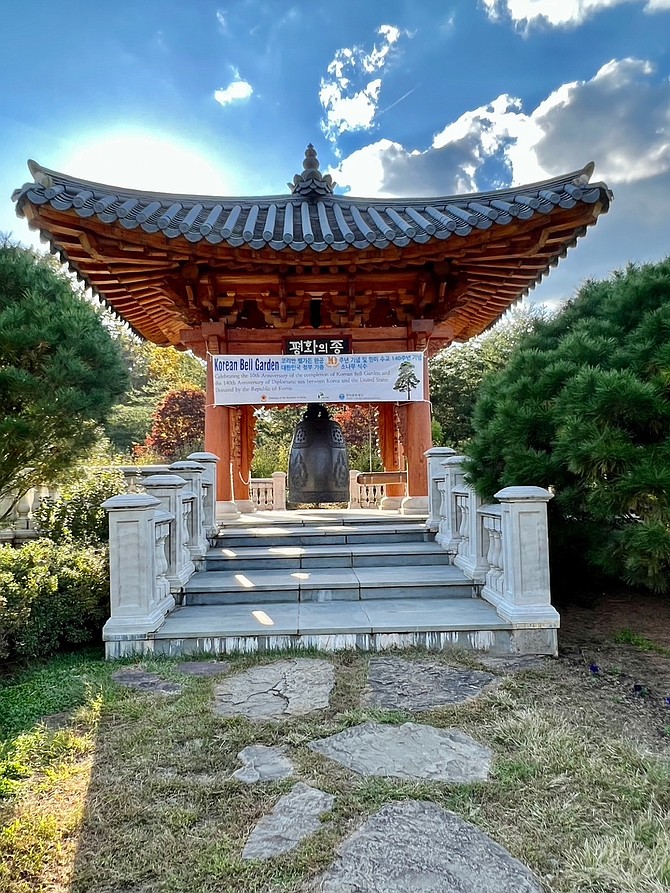 The Korean Bell Garden Pavilion, a significant element of Meadowlark Botanical Gardens, provides a cultural link for the many Korean Americans living in Northern Virginia. The Bell Garden is celebrating its tenth anniversary. 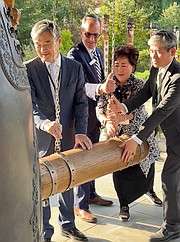 Republic of Korea Ambassador to the U.S., the Honorable Cho Tae-yong strikes the “Peace and Harmony” bell in the Korean Bell Garden in celebration of the Garden’s 10th anniversary, with NOVA Parks, Paul Gilbert; cultural committee president, Jeung-Hwa Elmejjad-Yi; and minister and consul general, Seijoong Kwon.

In an event brimming with symbolism, the Republic of Korea’s ambassador to the United States The Honorable Cho Tae-yong visited the Korean Bell Garden in Vienna on Oct. 7, for a ceremonial tree planting and ringing of the rare “Peace and Harmony” bell. The Korean Bell Garden, part of Meadowlark Botanical Gardens, is celebrating its tenth year anniversary this year, holding a festival in May and a tree planting this month (see Vienna Connection, May 25). The October evening event was attended by members of the Korean American Citizens Committee, state and Fairfax County officials, NOVA Parks staff, and other members of the community who joined in the ceremonial planting of a Korean Pine tree (Pinus koraiensis), a white pine species, emblematic of the country. The pine is a symbol of the national spirit and soul.

Speaking of the tree planting, Ambassador Cho said, “I’m very proud to mark this special occasion by planting of the Korean Pine tree gift from the Republic of Korea government in this beautiful garden. This exemplary collaboration between the people in the two countries led to the creation of this Korean garden in 2012. And now, only 10 years later, as we mark the 140th anniversary of the Republic of Korea and U.S. relations, the garden has become … beloved for visiting. The tree we are about to plant here today is also a fitting reminder of the spirit of the alliance we cherish. As evergreen pine trees defy the cold of the winter and remain bright green all year round; as such, they symbolize unchanging friendship, virtue and morality in my country. The Korean and U.S. alliance will defy hardships and remain strong and robust for many more years to come. And just like pine trees, this alliance will stay the course, promoting the values it was founded upon, universal values of freedom and democracy.”

Appointed as ambassador to the United States in May 2022, Cho is formerly South Korea’s Deputy National Security Advisor. When asked if he would have the opportunity to return home frequently, Cho shared that he had returned home the prior week for the visit of Vice President Kamala Harris. Harris’s visit was just four months after President Joe Biden’s visit to South Korea. Cho commented, “That’s a first. Even while our relations are very close, to have the U.S. President and Vice President visiting my country [in a short period], that really demonstrates the strength and robustness of the alliance. We have challenges including the North Korean threat, but as demonstrated by the American aircraft carrier Ronald Reagan visiting on the seas adjacent to the Korean peninsula twice in a couple of weeks time, that really also demonstrates the strength of the alliance.“ Cho referred to the USS Ronald Reagan’s trips to the area to participate in joint drills with Japan and South Korea. Cho represented his county in past years in talks with the U.S. and Japan, along with then Deputy Secretary of State, now Secretary of State Anthony Blinken.

In the peaceful quiet of the Virginia bell garden, the ambassador was welcomed by Supervisor Walter Alcorn (Hunter Mill), Sen. George Barker (D-39th), and delegates David Bulova (D-37th), Karrie Delaney (D-67th), Vivian Watts (D-39th), and Irene Shin (D-86th). Shin, a Korean-American whose parents immigrated to the U.S., was elected to the Virginia’s General Assembly in January 2022. She was the first to wear the traditional Korean women’s formal dress, the hanbok, during her swearing in ceremony. Shin noted that Korean is “the third most spoken language in Virginia, after English and Spanish. I think that’s a testament to the thriving Korean American community we have, especially here in Fairfax County.”

After the tree planting, the assemblage moved to the “Peace and Harmony” bell pavilion to strike the bell in celebration of the garden’s anniversary and the ongoing relationship of the two countries and Virginia. Symbols of unity between South Korea and Virginia are etched into the bell’s surface. Rose of Sharon, the national flower of South Korea appears with the Flowering Dogwood, the state flower of Virginia, and other elements such as Virginia’s State bird, the Cardinal. Also shown are ten traditional symbols of longevity: the sun, mountains, water, clouds, stone, pine trees, the white crane, turtle, mushrooms, and deer. The bronze cast bell, created in Korean by artisan Won Kwang-sik, was made using designs from the Silla Kingdom, circa 57 BCE through 935 CE, and shipped to the Vienna botanical garden. The “Peace and Harmony” bell is both true to the ancient design and rare; the only one of its kind in the Western Hemisphere. Weighing about three tons, it is rung without a clapper, instead struck from the side using a horizontal wooden beam suspended by a rope. The bell, suspended from the ceiling of the pavilion structure, can ring for more than three minutes after a single strike from the wooden beam.

The pavilion itself was built in the traditional way of Korean craftsmen without use of nails or screws. All pieces fit together precisely in a technique that has been shown to withstand the destructive force of earthquakes in Asia. The pavilion stands in the botanical garden with replicas of ancient Korean monuments and statues, walls and stone structures adorned with traditional Korean symbols, and a flowing water way. The garden was made possible through efforts of the Korean American Cultural Committee which raised $1 million dollars to start the project in 2005.

The bell garden provides a cultural link for the area’s Korean Americans, and owing to a partnership with the Republic of Korea, includes plant species typical in a Korean garden, for a natural plant ascetic with a wilder aspect than other oriental gardens. The Meadowlark Botanical Garden is located at 9750 Meadowlark Gardens Court, Vienna.